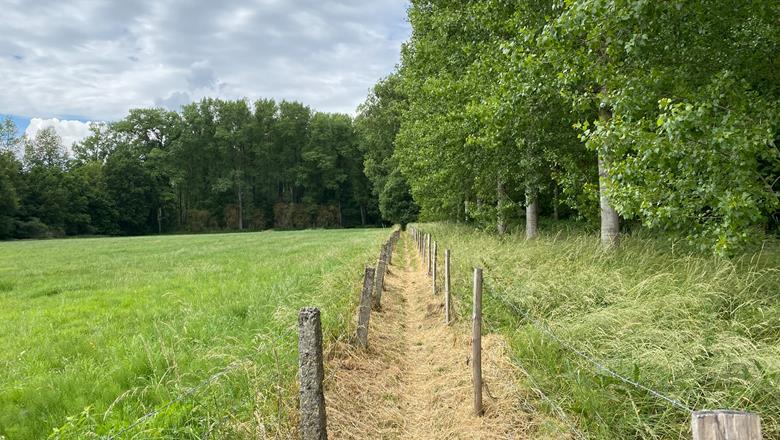 ‘Kortelake’ is an elongated stretch of nature in Overboelare along the Dender, more specifically between the city of Geraardsbergen and the border with Wallonia. On the right bank of the Dender lie the beautiful foothills of Oudenberg by the town of Boelare.

Description of the nature reserve

After more than 150 years, however, the match industry came to a standstill. What remains are the many poplar forests, which are still used for woodcutting.

The wet part of ‘Kortelake’, with its current poplar woods, is gradually growing into a valley wood with more native species of trees, such as the black alder, Salix caprea (willow), European ash, Guelder rose and blackthorn. The very wet areas are mainly dominated by reed vegetation. In other places, a mosaic of open swamp and valley woods is created.

The upper part consists of woods, mainly oak and alder. The nature reserve also consists of a small-scale meadow landscape with wooded edges and hedges. The transition from woodland to pasture is not abrupt, but gradual thanks to edge vegetation.

The water quality of the Dender and Kortelakebeek is visibly improving. As a result, migratory birds can often be seen in the Dender valley, where they can find food and shelter.

The relatively wet soils provide a specific flora. In many fields, you will find a herb layer of reed, iris pseudacorus, bugleweed and the lesser pond-sedge. In the slightly drier parts, the spring flora is characterized by the oxlip, pilewort, anemone nemorosa, arum maculatum and moschatel.

Animals such as deer, European polecat, squirrel, weasel, fox, ermine, water shrew, hare and rabbit have found shelter here. ‘Kortelake’ is also an ideal place for different types of birds. About 20 species come here to breed, the most striking ones being: common grasshopper warbler, Eurasian golden oriole, Eurasian woodcock, willow warbler, Marsh tit and willow tit. And this is good news because the latter is not doing very well on Flemish soil. A hopeful sign is also the observation of a couple of European stonechats during the breeding season. And who knows, the red-backed shrike that used to occur here in the past might make an appearance in the future.

In the meantime, the wooded edges and hedges with blackthorn have brought an explosion of the brown hairstreak. But also the giant goldcrest is found here in large numbers, a species that might be difficult to find in other areas.