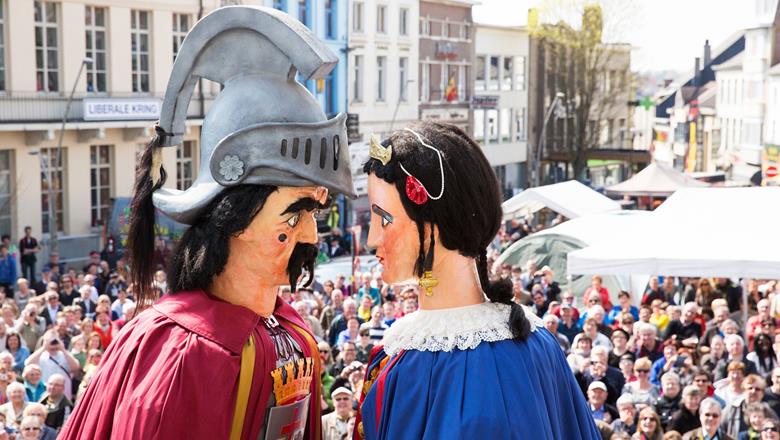 The city of Geraardsbergen has three gorgeous giants: Goliath, who is the male, Gerarda Ghislaine Agnes Frieda, his spouse, and child Kinneke Baba.

History of the giants

From the city accounts of 1643, we can infer that the Ommeganck float of that year boasted just one giant, namely Goliath.

It was not until 1807 that three giants were mentioned for the first time. The municipal council of 30 May 1807 decided namely: "to renew the structure and clothing of the largest giant Goliath, his wife and child, who are antique monuments of the city".

So the giant woman and Kinneke Baba were considerably older than 1807.

In 1865 - 1866, the municipal council gave the giant family a thorough make-over. Then sculptor Prosper Speck (1832-1898) was commissioned to restore the giants. The heads, wickerwork, shoulder pieces, diadem and clothing were all brought up to date.

A more recent repair dates back to 1977, when the garments were replaced and a basket weaver restored the giants’ wickerwork.

In 1996, the thatched underlay and clothing was renewed (clothes were made by the Athenaeum secondary school of Geraardsbergen).

After the giant Goliath and his companion Gerarda were blown to the ground by strong gusts of wind during the car-free Sunday in September 2002, the city has restored their heads.

In the 19th century, the giants were carried by bag handlers. This guild was a closed craft that has existed for more than 200 years. The bag handlers were responsible for loading and unloading the ships on the Dender. Every candidate bag handler had to take a test to become a member of this craft. This included carrying a very heavy bag, going back and forth, from the bottom of Denderstraat to Abdijstraat. It was an unwritten law that only bag handlers were allowed to carry the giants.

At the end of the 19th century, the police took on this difficult task. This was subsequently done by council workers.

Afterwards, outsiders were hired in, but this turned out to be financially unviable.

The former alderman for festivities and tourism called on volunteers within the council. The new group of carriers became a close circle of friends. This group of friends culminated in the Geraardsbergen Giants’ Guild and a board was set up (the foundation meeting was held on 29 October 1988).

Thanks to the guild, the giant family was restored and a new version of the Giant’s song was composed by Marc Godfroid.