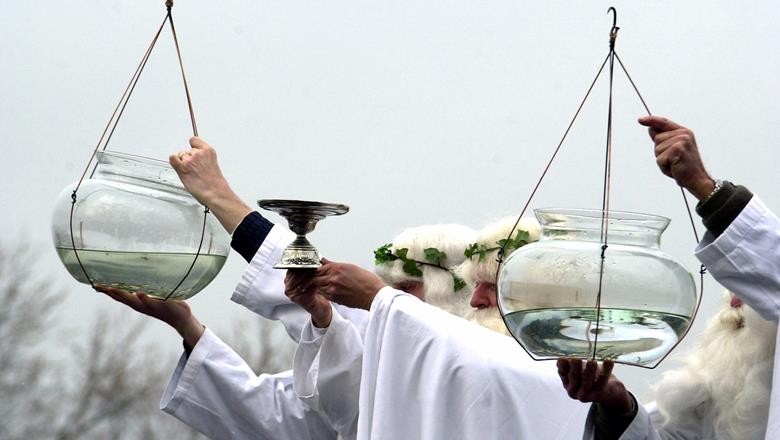 On one and the same day, Geraardsbergen celebrates twice: Krakelingen and Tonnekens Fire. The centuries-old double celebration was marked as UNESCO World Heritage Site in 2010.

The oldest surviving city bill (1393) mentions the expenses for the Tonnekens fire party, which was already organised by the town council and was already called an old custom. Since then, the evidence of both Krakelingen and Tonnekens fire has been found in the city accounts every year, with the exception of the religious wars in the 16th century and the First and Second World Wars.

Historical procession
At 3.00 p.m., a historical procession departs from the Romanesque church of Hunnegem, which adds a colourful dimension to some 25 centuries of Geraardsbergen history. The dean and town council head up the procession in historic clothing. The 1,000 or so extras are mostly local volunteers who, whether or not in school or association contexts, dedicate their time annually to depicting the historical facts and sages that make up the origins the festival. Each year, the procession is given a new theme with new elements.

‘Krakelingen’ throw (locally known as ‘Mastellen’ throw)
At the end of the procession, the druids, the dean, the city council, the bread basket carriers and thousands of spectators walk up to the top of Oudenberg (110 m).
The dean and town council pray to Our Lady in the Oudenberg Chapel, while the crowd settle around the stage to catch as many ‘krakelingen’ as possible. Before they can throw the approximately 5,000 ‘krakelingen’ (‘mastellen’ in the vernacular), the dean, the mayor, the aldermen and municipal councillors have to drink wine with a living fish in it from a 400-year-old silver chalice.
Then the actual ‘krakelingen’ throw starts. One ‘krakeling’ contains a note entitling the holder to the golden ‘krakeling’: a unique jewel in the shape of the famous ‘krakeling’, each time designed by another local jeweller.
After the throw, everyone can relax for a few hours at the fair in the city centre.

Tonnekens fire, a fire fest
At 8.00 p.m., a straw doll is lit at the top of the Oudenberg to banish the winter blues and hail a new spring, while folk dancers create the right atmosphere. In a few surrounding municipalities, the Tonnekens fire is ‘reciprocated’ with a smaller fire, called ‘Walmken’ fire. On the Oudenberg, lit torches are handed to the bystanders who bring them to the market square, where the merry-go-rounds spin at top speed.

Symbolism
The double celebration contains both Christian (e.g. the role of the dean) and pre-Christian elements (e. g. fire, live fish, bread, time of day). The pre-Christian elements probably date from the Celtic period. The ‘krakeling’ is a ring-shaped bread product of 10 cm in diameter. This shape refers to a cult bread that symbolizes the cycle of seasons, or life. Incidentally, the day is celebrated at the end of winter. Until 1960, this was the first Sunday of Lent, but now it is the penultimate Sunday before the first Monday of March.

The Tonnekens fire belongs in a broader tradition of pre-Christian fire fests and marks the end of winter and the return of light and life.

The dean, the mayor, the aldermen and municipal councillors each drink a small living fish, also symbolic of new life, in a chalice of wine, as a sign of festive joy and fraternity. This latter custom, described in detail by the humanist Joos Schollaert in 1599, was challenged by the animal rights organisation Gaia in 1997, but various judicial authorities eventually ruled in the city council’s favour.

Saga
Since the beginning of the 19th century, reference has been made to a historical saga around the origins of the ‘Krakelingen’ Festival. When Geraardsbergen was surrounded by the troops of Walter van Edingen in 1381 and threatened with starvation, the town council is said to have devised a ruse to escape the occupation: the last remains of bread and herring were thrown over the city walls as a sign of abundance and the besiegers left, discouraged....

In the historical procession, this saga is tested against the historical reality, which was much less appealing for Geraardsbergen: the city was taken and destroyed in no time at all. However, the saga continues to this day.